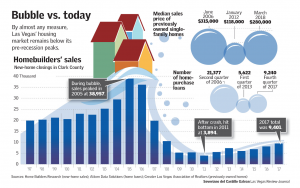 Attom Dat Solutions out of Irvine, California just released its Q1 2018 USA Home Sales report, which shows that median home prices in 57 of 105 metropolitan statistical areas analyzed in the report (54 percent) were above their pre-recession home price peaks in the first quarter.

“Rising interest rates and recently enacted tax reform that removed some tax incentives for homeownership were not enough to cool off red-hot home price appreciation in many parts of the country, with 30 of the 105 local markets analyzed posting double-digit gains in median home prices in the first quarter,” said Daren Blomquist, senior vice president at ATTOM Data Solutions. “Home prices are still below pre-recession peaks in 46 percent of local markets, but nearly one-third of even those markets posted double-digit home price appreciation in the first quarter.”

(updated 5/3/18) Per a recent Las Vegas Review Journal article……our market here in Las Vegas is still 4% below its pre-recession peak of $ 290,000.  Las Vegas house prices rose sharply in March from a year earlier as sales totals dipped, according to a new report.

The median sales price of previously owned single-family homes was $280,000 last month, up 1.8 percent from February and 15.7 percent from March 2017, according to the Greater Las Vegas Association of Realtors.

Buyers picked up 3,152 single-family homes in March, up 48.1 percent from February but down 1.3 percent from a year earlier.

Availability remained tight, with 3,835 such houses on the market without offers at the end of March, up 5 percent from February but down 30.1 percent from a year earlier.

Sales totals “are fairly similar to this time last year and have begun to level off a bit,” he said, adding that the group attributes this, at least in part, to the low inventory.

Las Vegas home prices have been rising at one of the fastest rates nationally, and last year’s sales total in Southern Nevada was one of the highest on record, despite the plunging inventory.

If you’re interested in adding to your investment portfolio or would like to get into the real estate investment business, please sign up and take a look at what properties we have in our inventory.