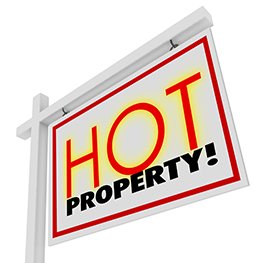 Inventory constraints that have fueled a sharp rise in home prices and made it difficult for buyers to gain a foothold in the market will begin to ease next year as part of broad and continued market improvements, according to the realtor.com®2018 National Housing Forecast released today by the online real estate information and services destination.

The easing of the inventory shortage, which is expected to result in more manageable increases in home prices and a modest acceleration of home sales, is based on an inventory growth trend that began in August 2017, according to realtor.com®. The annual forecast, which is among the industry’s bellwethers in tracking and analyzing major trends in the housing market, also expects an increase in millennial mortgage share and strong sales growth in Southern markets. The wildcard in 2018 will be the impact of the tax reform legislation currently being debated in Congress.

“We are forecasting next year to set the stage for a significant inflection point in the housing shortage,” said Javier Vivas, director of economic research for realtor.com®. “Inventory increases will be felt in higher priced segments after home buying season, which limits their impact on total sales for the year. As we head into 2019 and beyond, we expect to see these inventory increases take hold and provide relief for first-time home buyers and drive sales growth.” 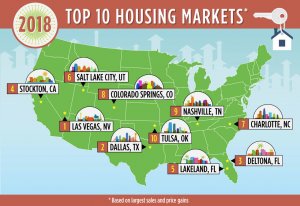 The future of Las Vegas is eye-searingly bright—and it’s not just because of all those lights on the Strip.

The economy of the once-downtrodden Sin City is expected to grow about 8.7% in 2018—compared with 6.4% for the rest of the top 100 markets, according to realtor.com. That means a lot of people moving in, moving up, and looking for places to live.

Things weren’t always so rosy. Vegas was devastated by the financial crisis of the late 2000s and the wave of foreclosures that followed.

“We like to say we were ground zero for the Great Recession: We fell further than many other metros,” says Stephen Miller, Ph. D., director of the Center for Business and Economic Research at the University of Nevada, Las Vegas. “So we had more ground to cover to catch up.”

One of the things drawing folks to settle down and stay in Vegas, long after their 72-hour bender has become a distant memory, is the city’s still striking affordability.

“Our Las Vegas prices are lower than nearly every major Western metro area,” Miller says. “People in California are retiring and selling their houses and moving [in]. … They want a lower cost of living.”

With the influx of new residents and the return of buyers who lost their homes to foreclosures, well-priced homes in good neighborhoods are practically flying off the market. Low interest rates are also luring more buyers.

What keeps this market as hot as it is right now is the lack of inventory. Those shortages may be exacerbated by still-underwater homeowners reluctant to plant a For Sale sign in their yard until their equity recovers. But there are fewer of those properties today as prices continue to nudge up.

What does this “HOT” housing market mean to local real estate investors?

The 2018 Las Vegas housing market is going to be great! Real estate investors, most especially rehabbers should be elated because a lot of people are coming to Las Vegas to live because of its reasonably priced housing. The lack of inventory creates a huge opportunity for rehabbers because they’ll be able to get top dollar for their rehabbed homes.

If you’re looking for discounted houses to rehab and flip, please complete the form below and we’ll forward  discounted properties to you.